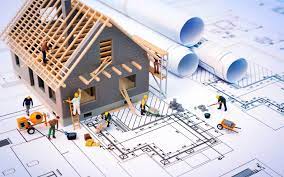 If the property owner does not have a survey, acquire a copy of the tax plat from this office. Verify the property tax rate for the area.

In the Planning Department, if they’re doing their formulaire permis de construire homework, they can tell you any future plans for your neighborhood and/or surrounding area. This is good information because you may not want to live next door to a future fertilizer factory or a new 4-lane highway that’s going to be built in the near future.

I can’t tell you the number of times I’ve seen individuals spend thousands of dollars designing the home of their dreams. Then they go down to the zoning department and based on the zoning they find out the distance from the street, called the building line, is, let’s say, 30 feet. The setbacks or distance you must build from your neighbor’s property line are 15 feet for the side yards and 20 feet for the rear yard. When they now see the only legitimate place to build a home, based on the zoning, they are shocked to see there is not enough room on their lot for their dream home. Their only option is to apply for a variance to cross these lines. These variances can be very costly, time consuming and many times they are denied!

If you don’t check these things out, don’t worry about it. Your future neighbors will be on the property nights and weekends with a tape measure, and they’ll check it for you! If it’s wrong, they’ll get a court order to stop the construction of your home. I tell them in the City of Atlanta, they are wasting the taxpayer’s money by hiring inspectors – the neighbors are far batter at this than the actual inspectors.

I remember a builder in Atlanta that built four homes in the million-dollar price range. He was near completion when he applied for a variance to build across the building line or, in other words, closer to the street. He played the game that it’s easier to get forgiveness than permission. The thing he didn’t realize was how powerful the neighborhood committee was in this area. The final decision from the county, “Tear the homes down.”

The builder, in frustration, threw up his hands, gave the homes and subdivision back to the bank and moved out of state. The bank came up with a very ingenious solution. They demolished one home and spent $350,000.00 to move the entire street. The three remaining homes were then the correct distance from the street.

I know it’s hard for you to believe, but even I make mistakes. In the 1980’s I was building a luxury home in an old section of Atlanta. The home was sold and near completion when we did what is called an “as-built” survey of the lot. It turned out that one corner of the home crossed the building line by less than a foot! Except for the survey, no one would have ever known about this infraction. To avoid any title problems, the lenders will want these problems corrected.

Unlike the good old days when I’d go to the zoning department and they’d sign off on something this minor, I had to apply for a variance. It took three months and a good sum of money to apply for this variance. Not to mention, the new owner was already supposed to be moved in.

At the variance meeting, there were two powerful neighborhood committees there with several hundred people saying, “Make him tear the home down.” They were very serious. Their rational – if you give this builder a variance, you are setting a precedent for all future builders to be allowed a variance. Fortunately, I got the variance, but believe me; you do not want to get caught in this kind of situation.

The rituals of a Catholic burial.

No comments to show.